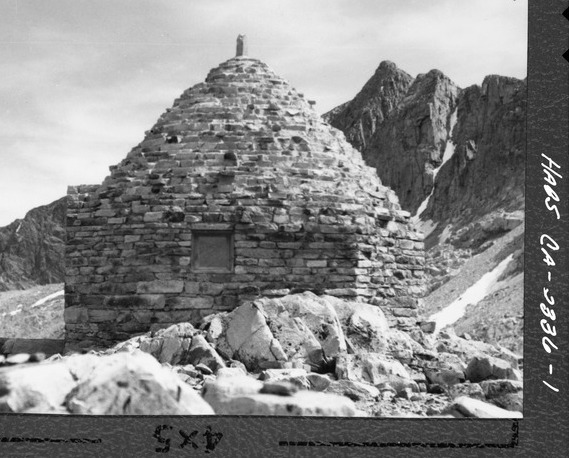 From the Shenandoah Mountains to the high country of the Eastern Sierra, trail huts are places found on remote mountain tops and nestled in shady valleys where adventurers find shelter and meet other travelers. They are places to sit back, exchange stories, and hear about other paths traveled. A trail hut is often lit by a lantern that beckons travelers of every age and origin to come in, and share the news from down the trail. 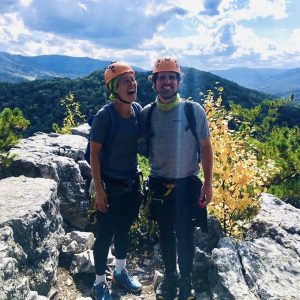 Evan Garrison is the owner and operator of The Trail Hut gear exchange, and as of January 2021, is its lead cashier, head of consignment, and trip planning specialist. Born in Lebanon, Kentucky, and raised in Chester, Virginia, Evan spent early summers in the Appalachians with family. Mountain biking, rock climbing, kayaking, hiking, and camping were as essential to life as food and water. Evan was known to save his lunch money for outdoor gear in junior high, which helped pay for climbing shoes and carabiners for use on adventures to places like Seneca, West Virginia and Stony Man in the Blue Ridge Mountains. Evan was inspired and mentored by the original creators of the Manchester Climbing Wall, seasoned adventurers who shared skills and libations with a younger generation.

Evan earned his undergraduate degree and Masters at Virginia Tech, and in 2010, with the US economy still recovering from the 2008 mortgage lending crisis, he headed back to the mountains, determined to thru-hike the Appalachian Trail. Two thousand some-odd miles later, as it had for so many hikers before, the AT forever shifted his perspective. Evan’s hiking knowledge proved immediately useful selling shoes and jackets at REI. Years passed, new professional opportunities manifested, but the “green tunnel” was never far from his mind.

Opening the Trail Hut in Richmond, Virginia in 2021 is the culmination of a slow-cooking notion about making outdoor experiences more accessible, more sustainable, and more community centered. Evan’s experience in backpacking, rock climbing, trip planning and logistics, and choosing the right gear inform the Trail Hut’s offerings -- from the map table, to the outdoor library, to the gear-for-rent options. Sustainability and access to the outdoors are what Evan hopes to make available in Richmond’s downtown by working with consignors to sell outdoor apparel, offering planet friendly backpacker rations, and helping hikers plan cost-friendly adventures at the Trail Hut. 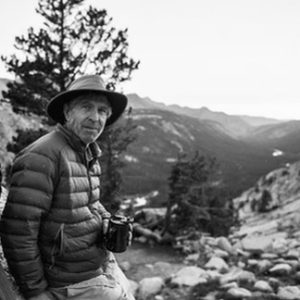 Doug Harnsberger, architect and owner of the historic carriage house where the Trail Hut operates is Evan’s father-in-law and the shop’s spirit guide. In the 1990’s Doug practiced architecture in the 2nd Street storefront that is now the Trail Hut. Between projects, Doug returned to his native state of California often to visit family, share adventures with his kids, and pursue a lifelong passion for conservation. As an advocate for the restoration of Yosemite’s flooded Hetch-Hetchy Valley, which Congress allowed San Francisco to dam in 1913, Doug delved into the history of Yosemite National Park and the historic structures that have yet to be documented in other High Sierra landscapes. One structure in particular, the Muir Hut, captured his attention during a 2015 family backpacking trip on the John Muir Trail. Working with the NPS staff of the Kings Canyon National Park to research the stone structure’s origins, he successfully nominated the landmark building to the National Register of Historic Places. (The building is featured in The Trail Hut logo). Doug worked with Richmond sculptor Paul Dipasquale to design and craft a plaque honoring the shelter’s architect/engineer Henry Gutterson. He discovered in his research that the Sierra Club erected the stone hut in 1930 to be “a secular shrine” to the man who sought to protect the Sierra Nevada mountains, “the Range of Light” from the unrelenting predation of developers and lumber interests. Doug and his oldest daughter Giles worked with the National Park Service to install Dipasquale’s plaque at Muir Hut in August 2018, where it now glows in bronze, sitting above a stone hearth within the granite shelter, perched at 12,000 feet elevation on the John Muir Trail.

Doug also played an important part in the revitalization of Richmond’s historic housing and downtown buildings in the 1980’s and 1990’s -- supporting the development of affordable housing with the Better Housing Coalition and collaborating with Highland Park Rep, a north side community development corporation -- before moving to Pennsylvania with his wife Cindy. Doug returns often to Richmond to visit two of his grown children and their families, and he remains the owner of the unique carriage house on North 2nd Street. Often compared to the little house featured in the Pixar film, “Up!”, the quaint building has played many roles in downtown Richmond: once the carriage house to a large Grace Street mansion, later a bologna burger cafe, architecture firm, market research consulting group, and finally as an outdoor consignment shop. Doug hopes that it will one day offer coffee and beverages in its rear “barrel vault,” itself an architectural marvel. Read more about Doug’s work to uncover the fascinating origin of the original trail hut at this link.

Today, Doug is an advisor to the John Muir Trail Wilderness Conservancy and is working with the Historic American Building Survey to document fifteen other structures on the JMT for the Library Of Congress. Doug, Evan, and Giles plan to backpack the original JMT “McClure Route of 1915” with a team of Sierra luminaries in the summer of 2021.

“To be whole. To be complete. Wildness reminds us what it means to be human, what we are connected to rather than what we are separate from.”